We've driven past Mike & Jeff's BBQ several times over the years, but just never got around to going there. We finally tried them out this weekend and found passing them by had definitely been our loss. 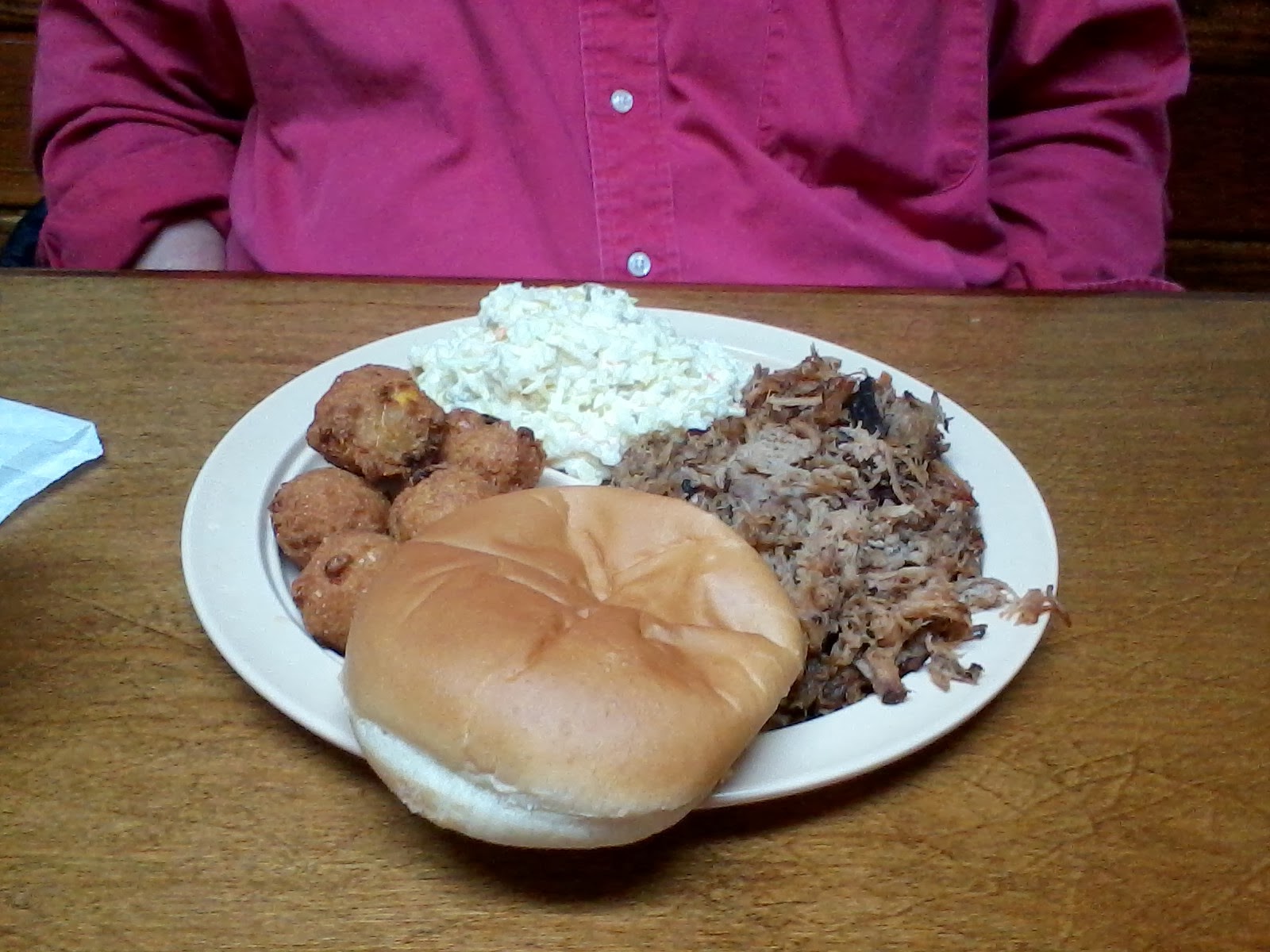 We both had pulled pork plates, which come with two sides. I chose slaw (since they don't have an option of putting slaw on the sandwich) and hush puppies. The photo above is the small plate (can you imagine how much pork is on the large plate). The bbq is so good it doesn't need any sauce, although they provide a mustard and a red vinegar sauce, which the latter was our preference. The hush puppies were good  and the slaw was made so well it didn't need any salt or pepper. 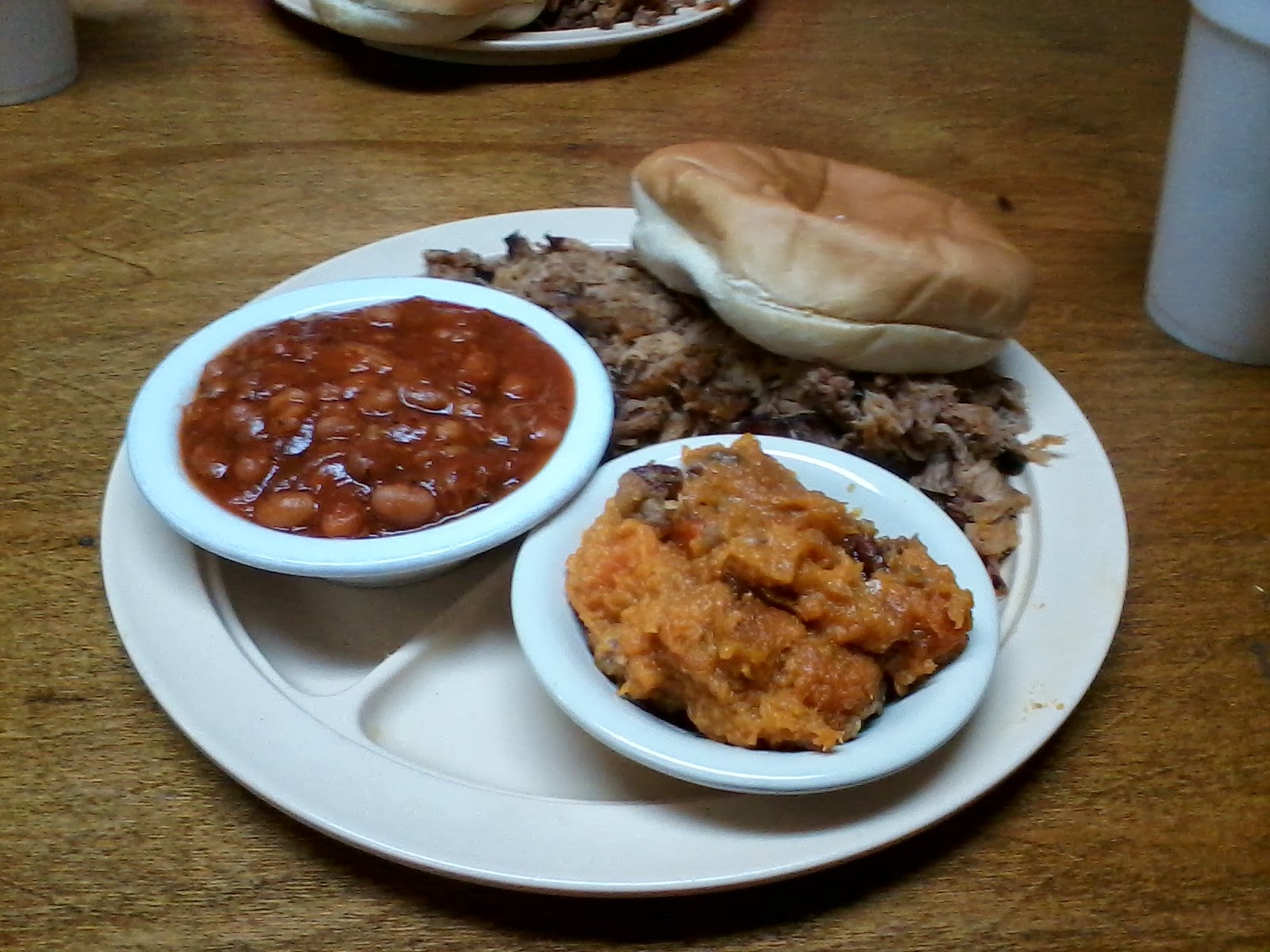 Above is my wife's plate, she chose baked beans and sweet potato souffle as her sides and both were delicious. They also steam the bun that comes with your meal which is a definite plus. 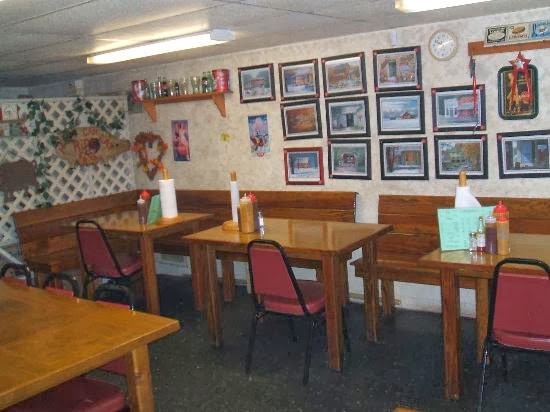 Mike & Jeff's is a tiny space with a few seats at the bar and a small dining room in the back, I'm guessing the whole restaurant would only seat 25-30 people. We went at 1:30 pm on a Saturday and by 2 pm most of the back dining room was taken plus a few to go orders had been served. 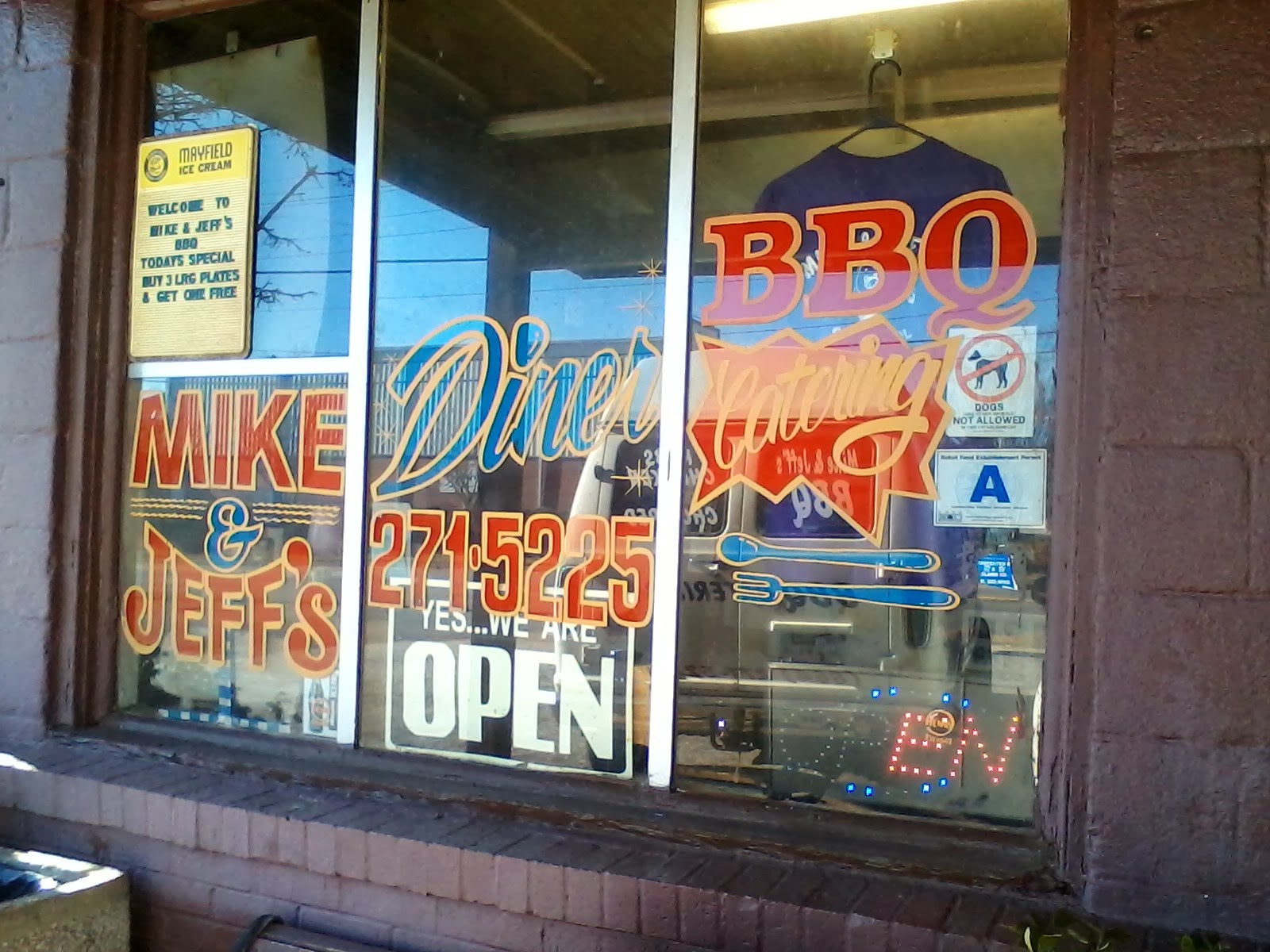 There is only one other BBQ place where we have eaten which I consider better, and that's by a slight margin,  Bubba's BBQ & Bash in Spartanburg. The main reason is Bubba's meat is a little more moist, but other than that these are my two favorite BBQ spots, with all others in our immediate region paling by comparison. So when I'm in the mood for Q and don't want to make a trek to Spartanburg, all I have to do now is drive to the San Souci section of Greenville.
Posted by Frontal Lobe at 10:34 AM No comments: 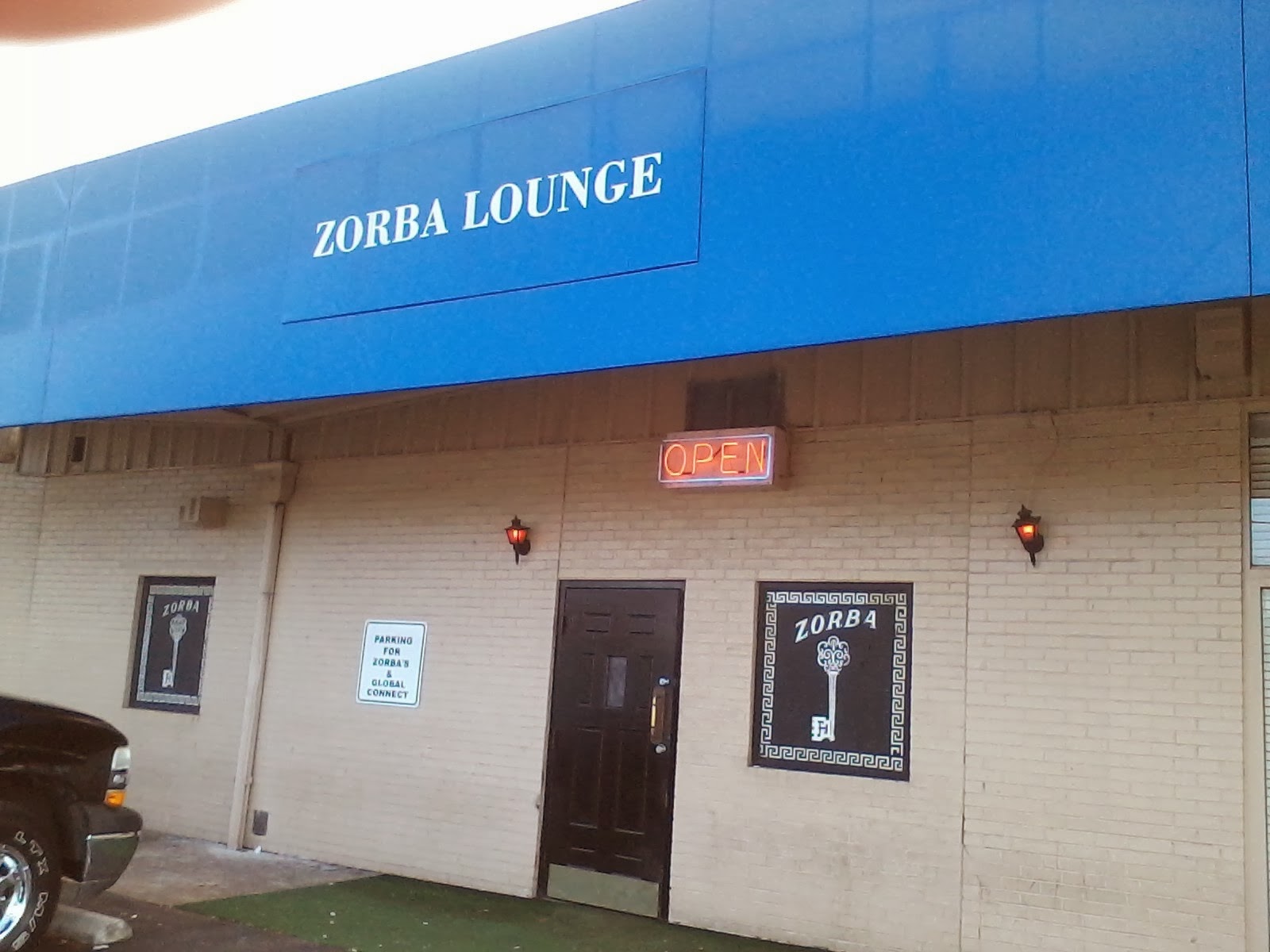 We've eaten at Zorba's East in Taylors, but we've never been to Zorba Lounge on Washington Street. When I was in high school (back in the dark ages) Zorba had a reputation for having topless waitresses. If that was true, I've never had anyone who could verify that fact, only that they also heard the same rumor. So, I always imagined it was going to be huge inside, but it was actually a fairly tiny place and if there used to be topless waitresses there, then many a person must have got popped in the head with a boob at some point during their visit. 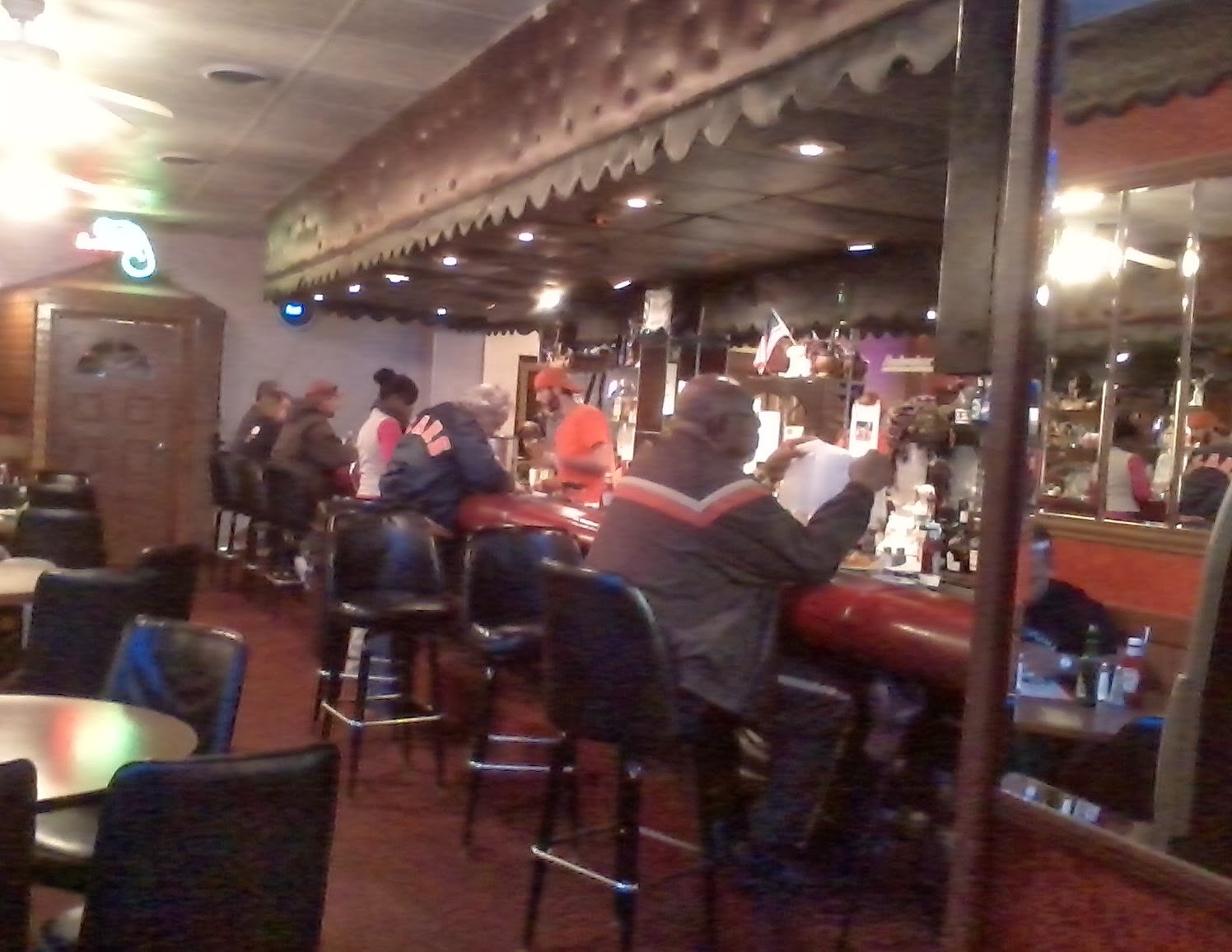 We went to try the cheeseburger, but also saw they had a Reuben sandwich on the menu, and since we are always in search of a good Reuben, we split one of those and also split a cheeseburger with an order of fries. The cheeseburger wasn't a big patty, but they knew the right combination of meat, lettuce and tomato and mayo to put on an onion bun, and it was delicious. The Reuben was pretty good, definitely worth ordering, and it also had the right combination of corn beef, sauerkraut, and Russian dressing assembled on rye bread, it just wasn't as good as the cheeseburger. Add in four Yuenglings in bottles and this was a very satisfying meal. I should also mention the staff were friendly and efficient (something Zorba's East doesn't always have). Zorba Lounge is now on our must visit again list. 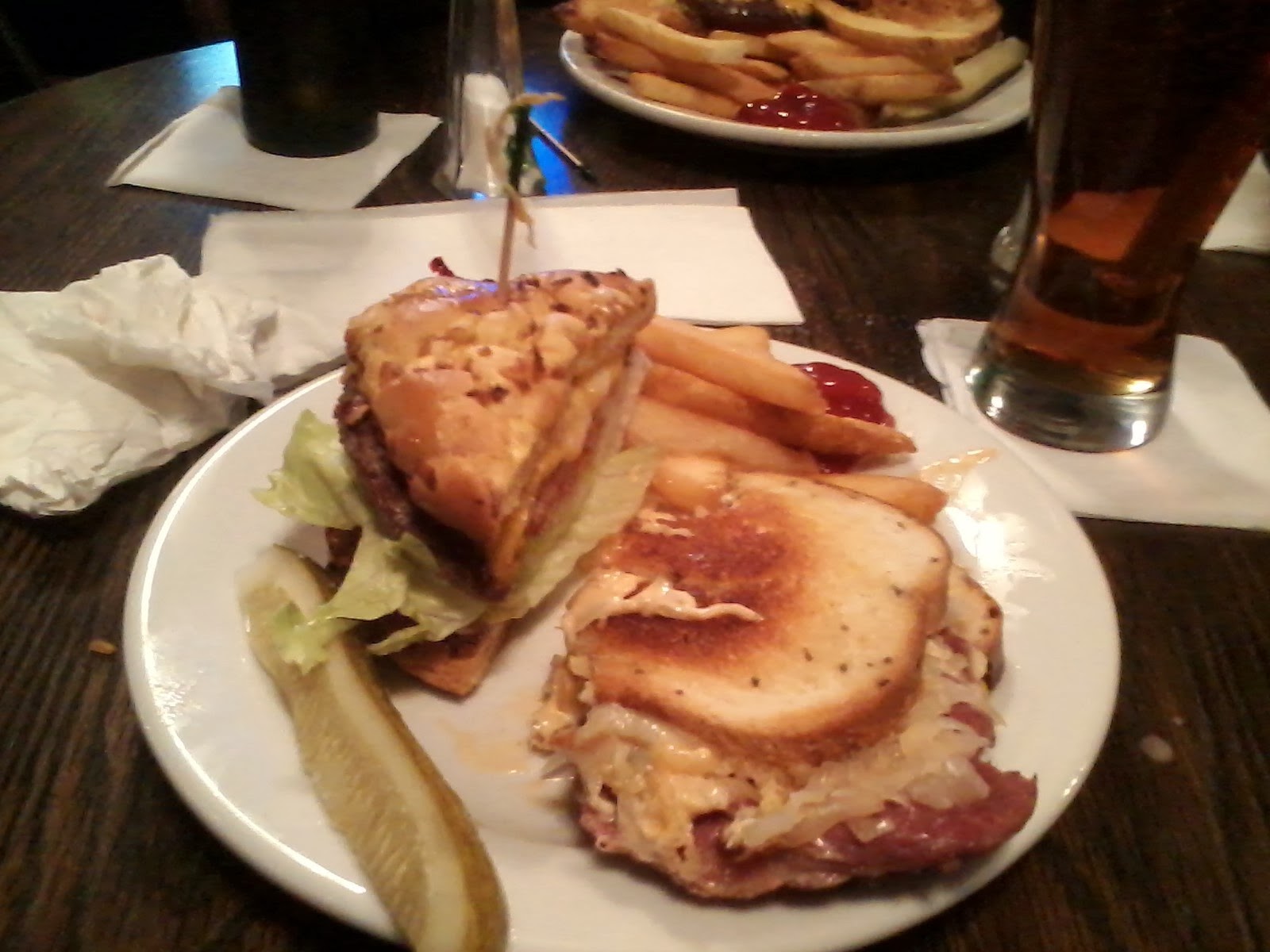 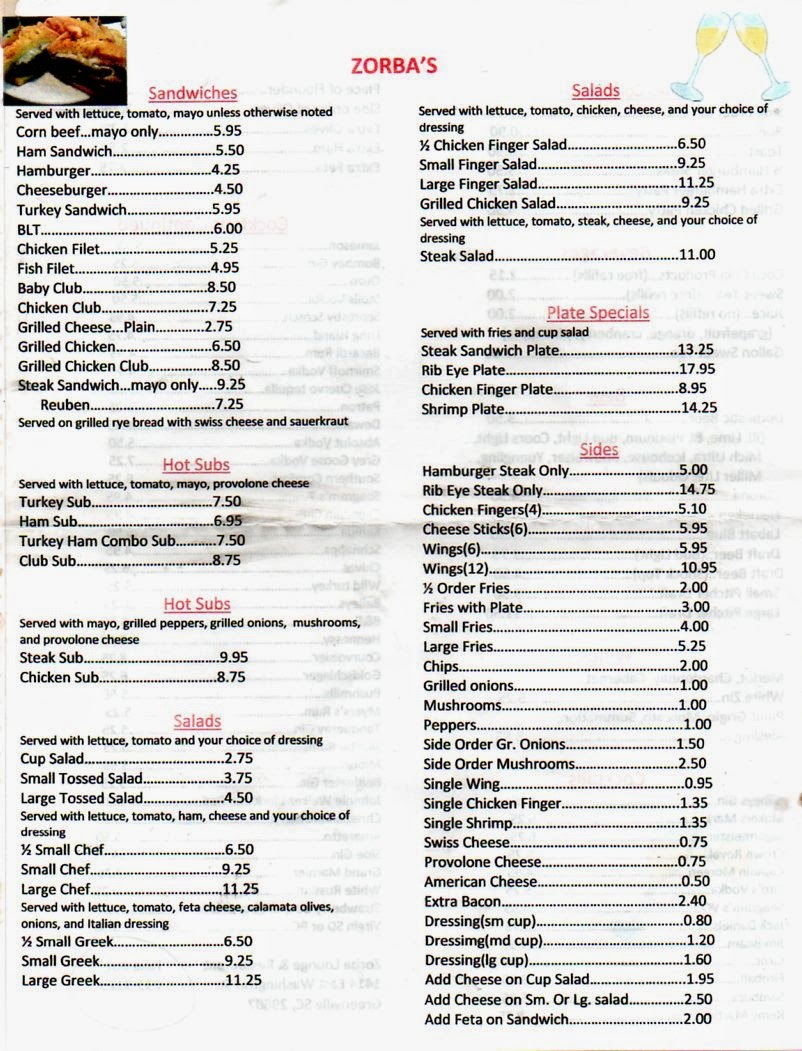 Posted by Frontal Lobe at 4:34 PM No comments: