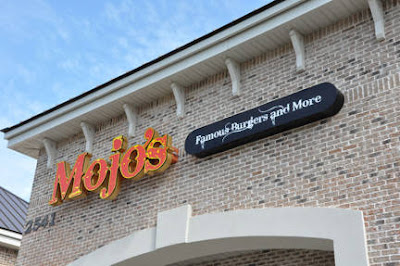 IF Mojo's is trying to create a chain, they have certainly succeeded. Although they only have three locations - one in Simpsonville, one on Woodruff Road and the one that I ate at near Cherrydale - I have never eaten in a local restaurant that made me feel like I was eating in a conceptual chain.

They serve complimentary peanuts (WHAT A CONCEPT) that come in a big bucket, with another bucket for your shells....these two buckets take up 1/2 of the table. Furthering the chain concept is what sounds like "Best Hits From Happy Days"...OR maybe that should be "Worst Hits From Happy Days"....since it's every 50s song that has been run into the ground by being overplayed. And Hell Yeah!!! Play that music loud, so we can all think we're having a good time. And last but not least, throw in a lackadaisical server to top everything off.

On to the food.....I knew I would NEVER order another hamburger from Mojo's when I picked it up and found the bun C-O-L-D....they've lost me before I've even taken a bite. The restaurant counts on the meat warming the bun, which it did on my dining companion's bun (who by the way liked the burgers), however my bun never warmed up properly. The meat was a pretty good quality, but on the dry side...which I must also note was the same with the chili on my burger...dry as a bone. 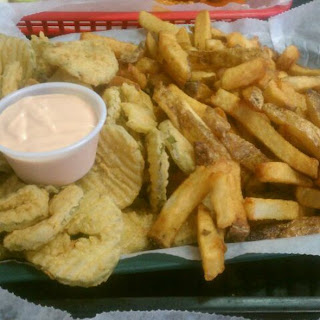 After having said all the above, I guess you think I would never go back to Mojo's, but they did have something that saved the whole meal....fried dill pickles....fried with just a light batter like they should be and their fries, while cut into too small pieces for my liking were also tasty. I'd return in a heartbeat to eat the pickles...but PLEASE don't make me order another hamburger.
Posted by Frontal Lobe at 5:59 PM 2 comments: 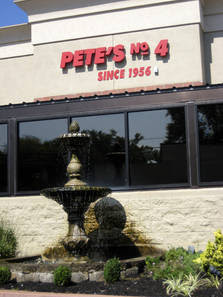 In a search for fried pickles, Peggy ran across Como's Pete's No. 4 on Augusta Rd. It has been years since we've eaten there, but today we made the trek across town and it was more than well worth it. 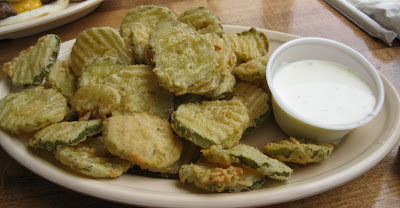 Above is the much sought after pickle fries, this is a small order and was $3.15. They were cooked to perfection and mighty tasty. Too bad you can't order a beer at Pete's since that is the ideal compliment to these, but I'll have to say Pete's had a very good sweet tea ($1.99). How good....well I normally don't drink tea anymore, but I must have had three glasses today. 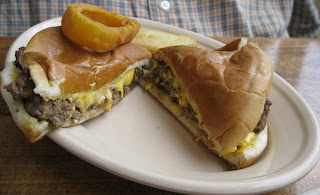 I had the Pimento Burger (4 oz patty with homemade pimento cheese) ($4.25), it comes with lettuce, tomato and mayonnaise. I opted to leave off the lettuce and tomato, since I already had my vegetable serving with the pickles! 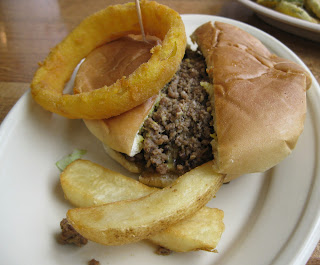 Peggy had the Pimento Chili Cheese Burger (4 oz patty with homemade pimento cheese, served with mustard and onions) ($4.70). I sampled it and found it just as good as mine and Peggy really enjoyed it. These were some great burgers and fried pickles and we will definitely be going back.


Posted by Frontal Lobe at 4:10 PM No comments: 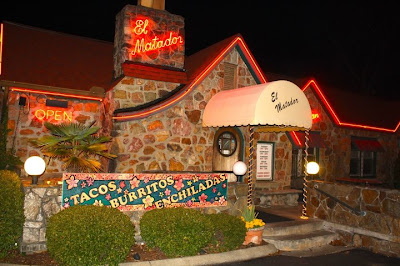 Sometimes it's good to visit an old friend, which we did tonight when we went to El Matador. We used to go to this restaurant a lot, but over the years, it became "We should go there again sometime". So, we finally just set a date and went.  In case you don't know, El Matador (to the best of my knowledge) was the first Mexican Restaurant in Greenville back in 1968 and the quality of the food has never wavered. The meal we had tonight was right on target with all the meals we've eaten there through the years. 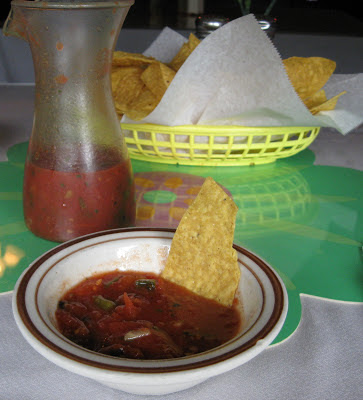 You're served complimentary salsa and chips to begin and we always just go for the mild which is spicy enough. It has a great fresh taste and I assume it's made in house. 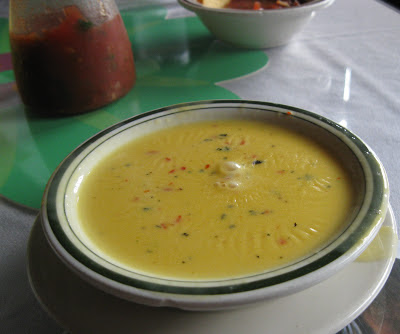 We also had a small cheese dip, I don't think I've ever been to El Matador and not had cheese dip.

Peggy had a super tostada with beef and a chile relleno.  The chile relleno is like no other I've ever had. It's a chile stuffed with beef and cheddar cheese and wrapped into a ball and battered and deep fried. The flavor reminds me of real buttered popcorn (you know before they came out with that goop they use on popcorn now).

I tried something new (for me), a pollo fundido (seasoned chicken with three cheeses, deep fried, then baked with more cheese). Ok, that's a lot of cheese but it works. Our tab (with two beverages) was 28.00 pre-tip. We had our favorite server Rusty (I don't know how long he's been at El Matador, but I swear he doesn't age). Rusty is one of the top servers you will have anywhere. So the lesson here is, don't forget your old favorites. They were your favorites for a reason and are just waiting for your return.

Posted by Frontal Lobe at 7:23 PM No comments: