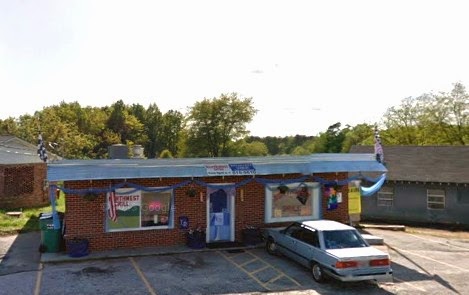 Northwest Grill, 13045 Old White Horse Rd,
Travelers Rest, SC 29690
I know polls mean nothing, except how many people you can get to vote for you. However, Northwest Grill piqued my curiosity when it was recently voted #2 in WYFF's Best Burger Facebook Poll. It's 26 minutes from my house to Northwest Grill and I'm happy to say that the trip is well worth it. 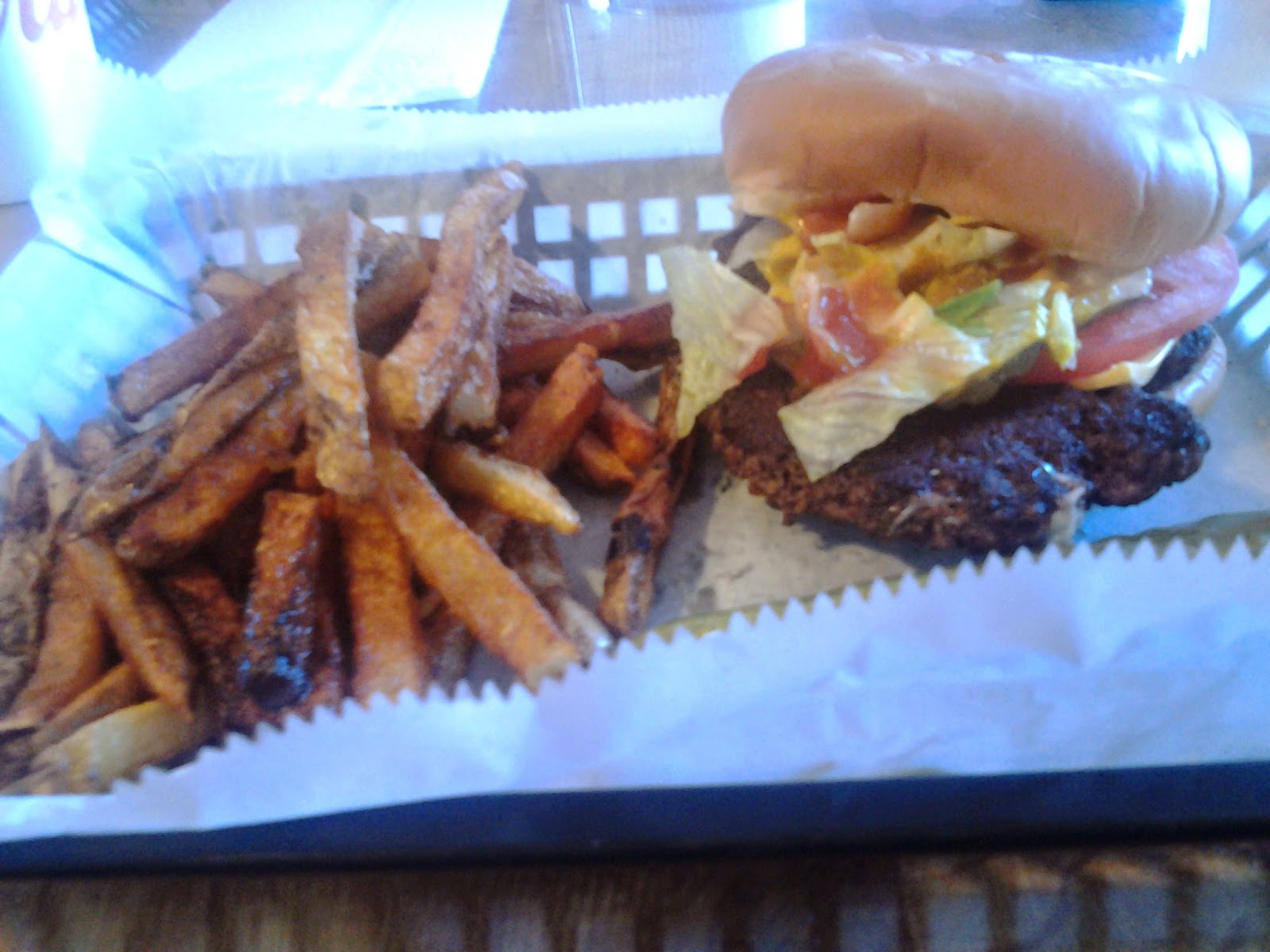 We both had cheeseburger plates, I got the large (probably about 1/3 pound) and my wife got the small (probably about 1/4 pound), both were delicious, cooked right and accompanied by fresh cut french fries. On top of the great burger, John, the cook who had a name tag that said "Burgerologist" (and he definitely deserves that title), insisted that we try the banana pudding, which was made from his Grandmother's recipe. This was an outstanding banana pudding and I think the only one I've had that was better was at OJ's Diner, and John's was darn close. 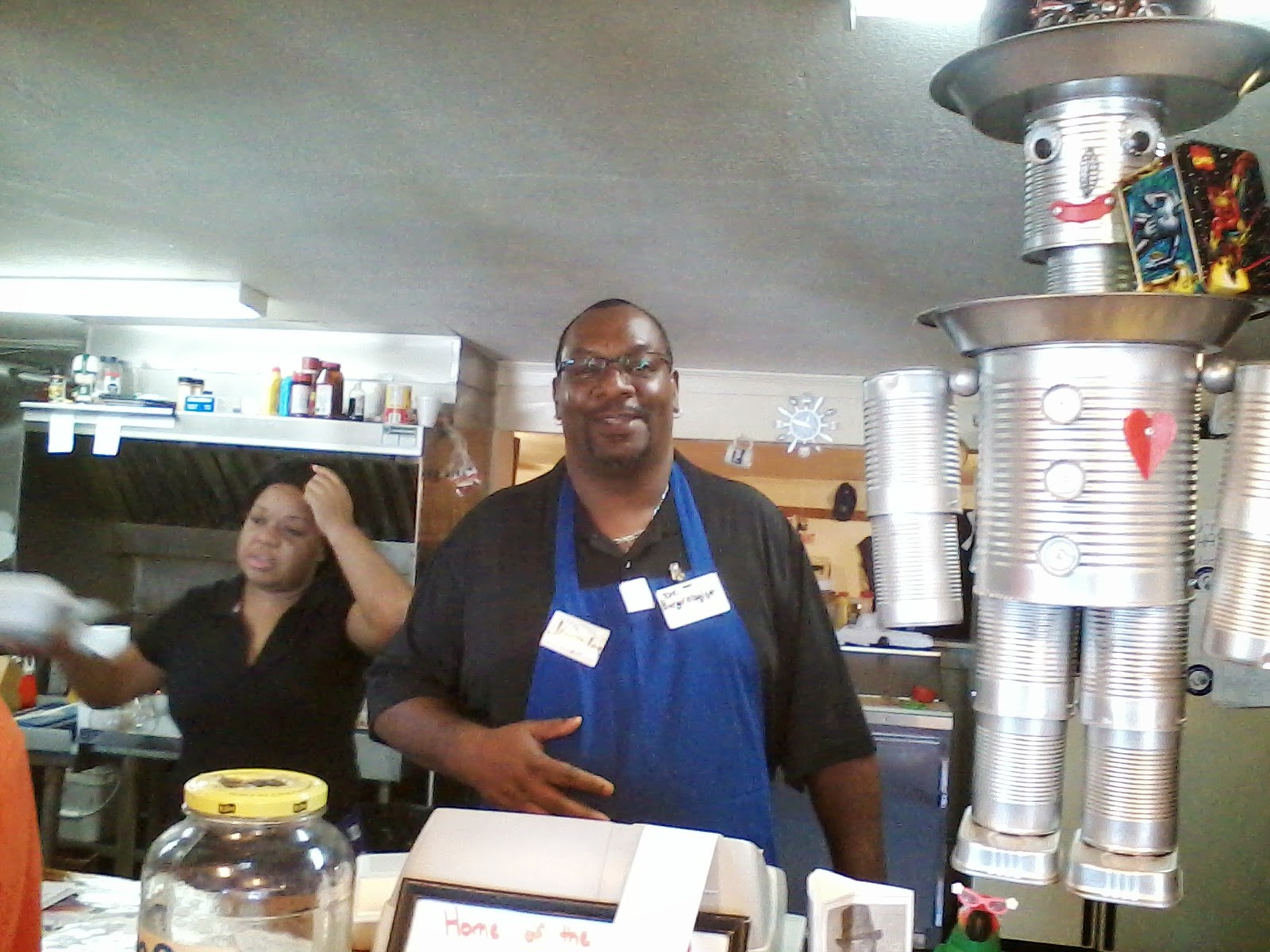 Be aware when you go that each order is made fresh, so if there's a few orders in front of you, there will be a short wait. Once your burger arrives, you'll know it was well worth that wait and if you're anything like me, you'll be thinking "I'm definitely coming back to Northwest Grill".

Posted by Frontal Lobe at 8:55 PM No comments: 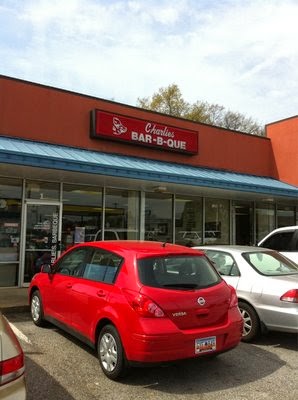 I've eaten at Charlie's Bar-B-Que before, but it was many years ago. We've driven past the restaurant several times over the last few months, so I thought I would give it a another try. Unfortunately, that was a mistake. I'll give them credit for having a very friendly and efficient staff; however, that doesn't make up for the low quality meals that we ate there today. 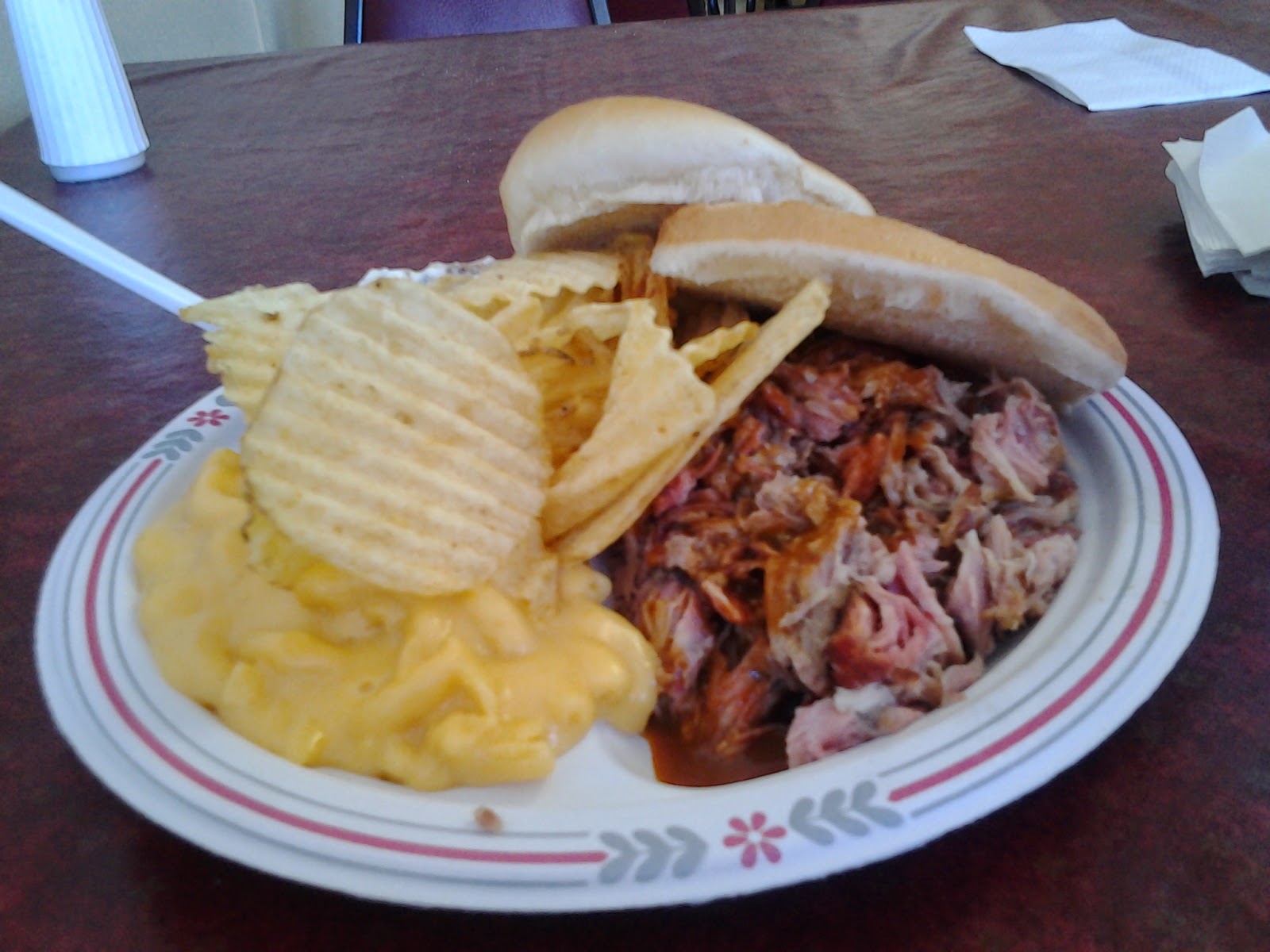 I had a chopped sandwich plate with macaroni and cheese and the loaded potato salad. My wife had the same plate but with slaw and baked beans (see photo below). Much to my dismay, the macaroni and cheese was your standard "Kraft" style. I think this is the first time I've been in a BBQ restaurant and been served a children's dish. The loaded potato salad was the best thing we had, but I'm assuming they buy it from someone, since it was pretty obvious they didn't put much effort into their sides (slaw and beans were both just ok). If the BBQ had been good, I could have overlooked the sides, but the meat was practically tasteless and my guess is that is why they put sauce on it before serving it to you. My recommendation for Charlie's Bar-B-Que is spend your money at about any other BBQ restaurant in Greenville and you'll be better off. 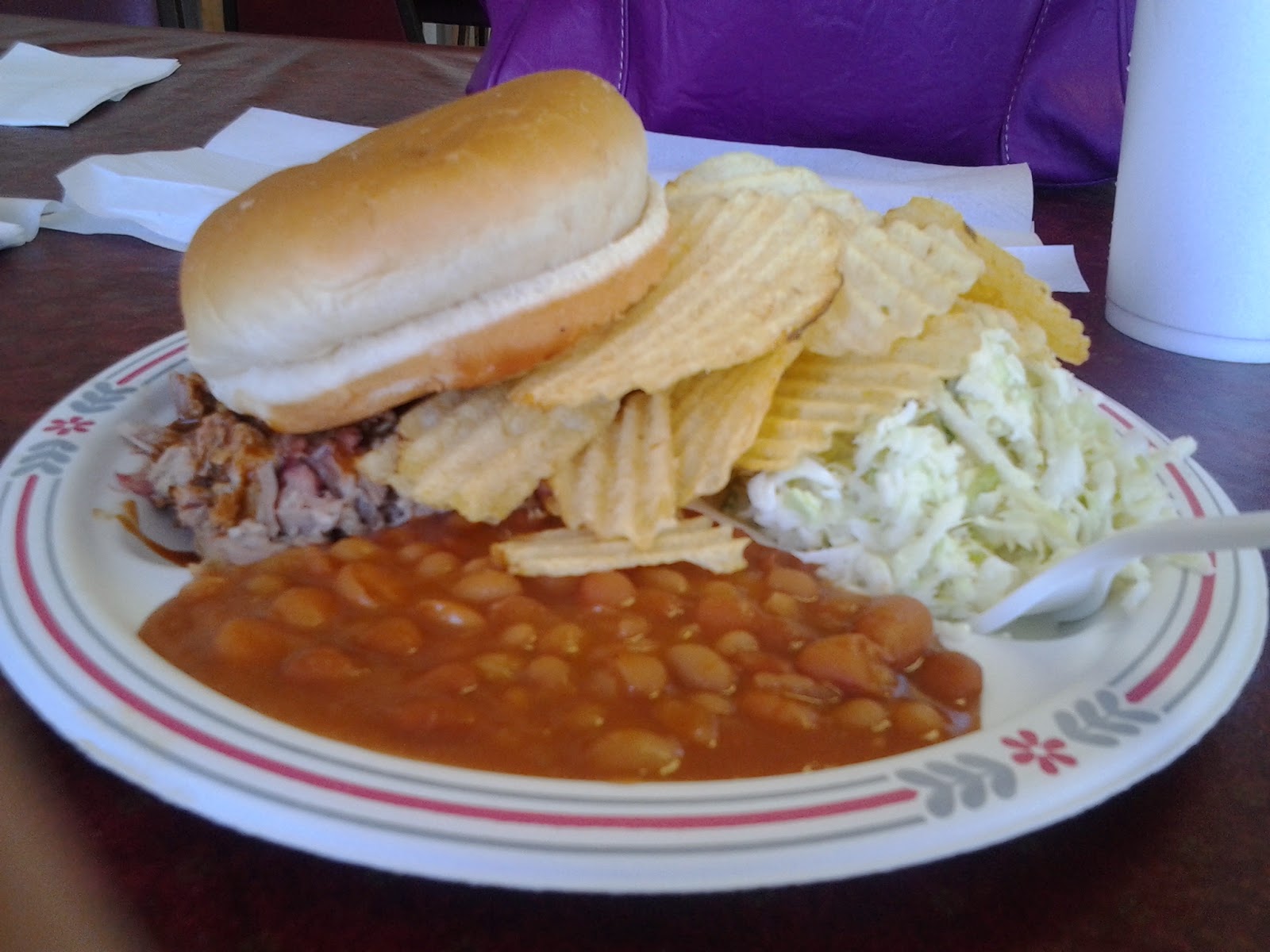 Posted by Frontal Lobe at 4:06 PM No comments:

Circle M BBQ in Liberty SC made the SC BBQ Association's 100 Mile BBQ List (BBQ that you would drive 100 miles to eat). Everybody's taste in BBQ is different and I have to say, that for my taste, Circle M was just pretty good, but more like 10 mile BBQ (BBQ that I would drive 10 miles to eat....that's still not bad, since there's some BBQ I wouldn't drive a mile to eat). 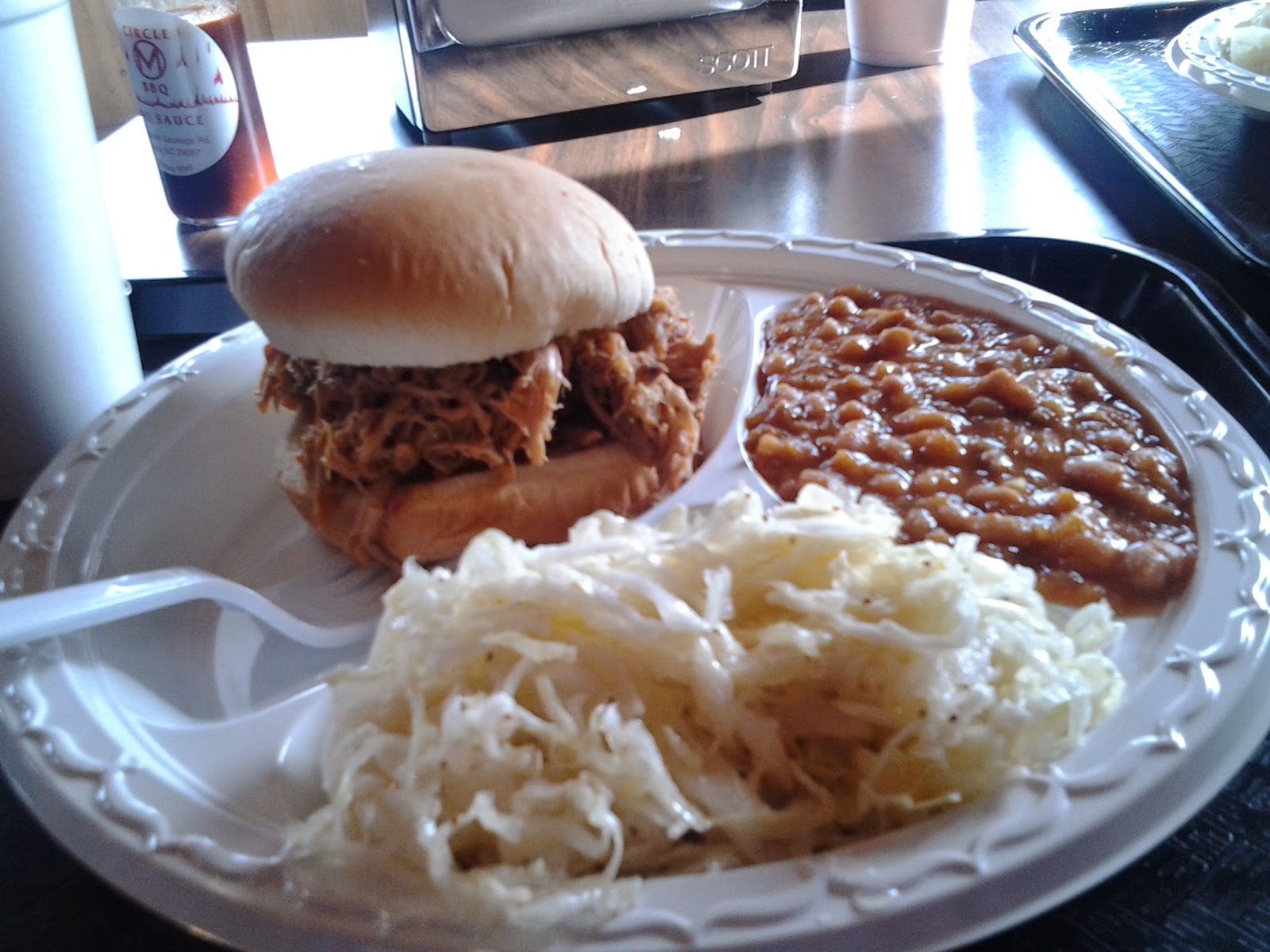 When I say BBQ, I mean only one thing, the classic chopped/shredded pork Q on a bun. So I had the small bbq sandwich plate which comes with slaw and beans (no choosing sides at Circle M, these are the only two sides, with one exception, you can replace one of the sides with Brunswick stew for an additional .75. My wife had the same plate with an added side of Brunswick stew. 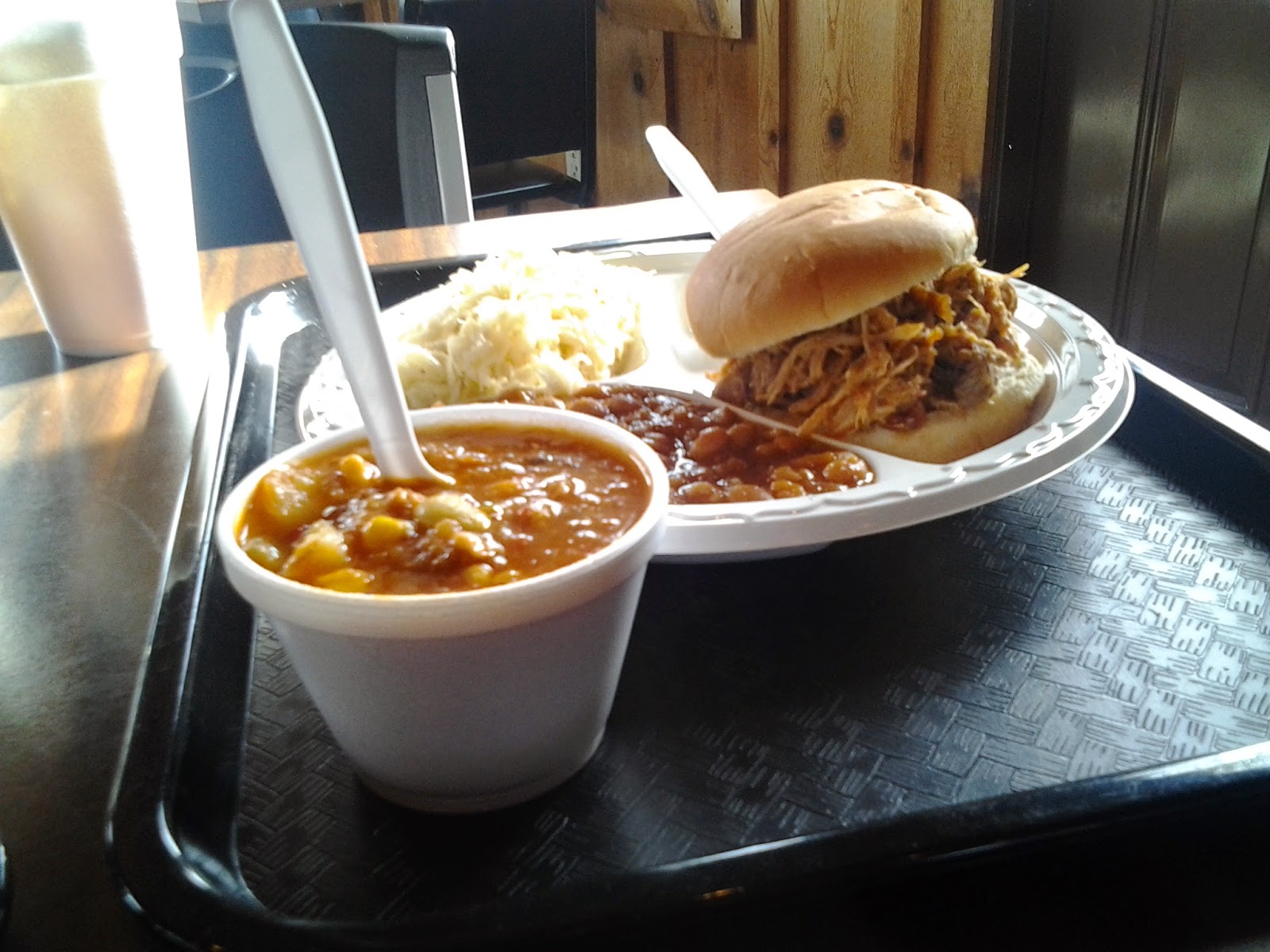 The sandwich was good, but the smoked meat already had some of the pepper vinegar sauce they use (the only sauce available). It was ok, but I would have preferred tasting the meat and deciding if I wanted any sauce. If the meat is good enough, it shouldn't need any type of sauce. I thought the beans were pretty good, the wife thought they were fair. She did really like the marinated slaw, which to my surprise was sweet. Hearing that the owner had learned to cook Q in NC, I was assuming he would fix a "red slaw". I'm not big on Brunswick stew and my wife said she had had much better. If I was in Liberty and someone said let's go to Circle M for some Q, I would be agreeable; but I certainly wouldn't ever drive from Taylors to Liberty again on my own, I can get much better Q in a much shorter trip.

Posted by Frontal Lobe at 8:06 PM No comments: