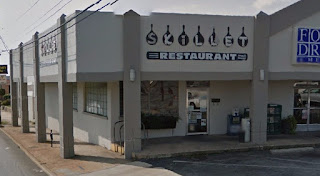 I've eaten at The Skillet several times and it's on my regular list of places to eat whrn I'm in Spartanburg. I think the first time we went, I ordered a waffle and sausage. My wife ordered Blueberry Pancakes with bacon, which is what I always order now. 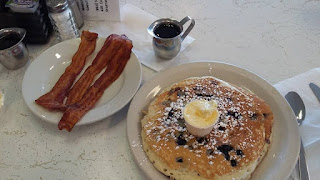 How good are these? Well, I don't even like blueberry pancakes, or at least I didn't think I did until I ordered them at The Skillet. As an added touch, the pancakes are served with warm syrup. I'm also not that big on ordering bacon in restaurants because most places cannot cook it  crispy, but The Skillet knows how to cook bacon that's crispy and tasty. 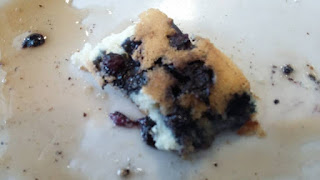 The above photo shows you the concentration of blueberries in the pancakes. No skimping at The Skillet.

The Skillet is fairly small with just a few tables and counter seating. They're only open 6am to 2pm Monday through Saturday and 8am to 2pm on Sunday. Everything I've seen them serve looked good and if I lived in Spartanburg, I would try other things, as it is, I'll just keep ordering blueberry pancakes and bacon and be mighty happy.
Posted by Frontal Lobe at 6:08 PM No comments: 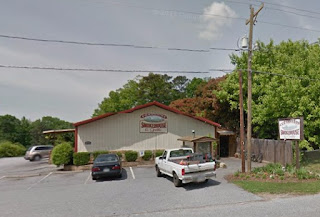 Southside Smokehouse was ranked the #2 restaurant in Landrum SC and since their menu looked enticing with not only BBQ (which we're almost always up for), but also with a wide array of other sandwiches and seafood, we thought we would give them a try. 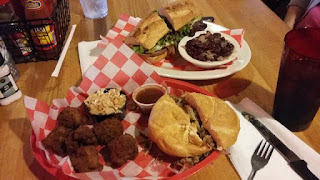 We ordered a couple of sandwiches to split. The sandwich on the far side is The Figgy Pig: Smoked ham, fontina cheese, fig jam, topped with balsamic tossed greens on french bread. The combination of all these different flavors actually all combined to make a pretty tasty sandwich. The side was red beans and rice, oddly made with tomato sauce. They were worth trying once, but I wouldn't order them again.

The other sandwich is their BBQ, described as smoked tender pork with Lexington NC style dip on the side, served with slaw. The meat did have a smoke taste, but it was dry and tough. I tried to soak the meat with enough sauce to make it edible, but soon realized this was a lost cause. This ranks as the worst BBQ I have ever eaten (or in this case, tried to eat). The side was hush puppies, which were large and cooked hard. I'm glad I didn't order oysters, because I later saw a photo on the wall and they would have been breaded the same way. 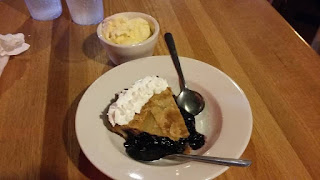 They have a wide selection of homemade desserts (not made in house, but made at someone's house and served by the restaurant). I had read about the blueberry pie and since it was offered that day, we split a slice with ice cream on the side. It's been a long time since I had pie crust made with lard, but I'm pretty sure that's what this crust was made with, it was absolutely delicious.

Final thoughts: I should have known if a place doesn't just serve primarily BBQ, then there's not going to be much pride in their Q. At least there certainly wasn't at Southside Smokehouse. Would I go back to eat lunch, maybe; would I go back just for dessert....DEFINITELY.
Posted by Frontal Lobe at 9:16 AM No comments: 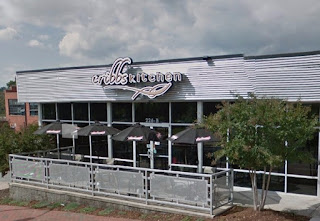 We have passed by Cribbs Kitchen many times on our many treks to Spartanburg and have always talked about eating there, especially since it always appears on any "Top Ten" list of Spartanburg Restaurants. Last week, we finally made it to Cribbs to give them a try. 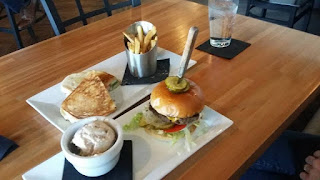 Seeing many raves about their burgers, I tried the Cribb Style burger: Gooey American cheese, house made mustard, pickles, onions, lettuce, tomatoes, mayo, $9.00.  It was a good burger, but it was just that, a good burger, nothing out of the ordinary. However, my side: Smoky Potato Salad was excellent. My wife got Cribbs Chicken Salad: Pulled chicken, goat cheese, pecans, onion, celery, bacon, craisins, lettuce, tomato, sourdough, $9.00. The taste was fine, although it appeared the goat cheese they used must have been really wet, since the sandwich fell apart from too much liquid. Just like the burger, this sandwich was good, but nothing other than just good. Her side of Parmesan fries had very little Parmesan, so didn't really live up to its description. 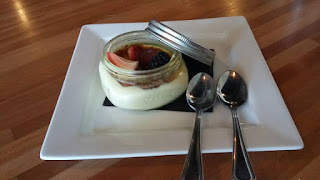 For dessert, we split a Mason Jar Creme Brulee, $7.00. I guess they thought the mason jar was a cute idea, when it actually made it a little hard to eat; but this was still the highlight of the meal, even though the strawberries were on a little on the hard side.

My final thoughts on Cribbs Kitchen: Service was attentive, especially from the floor manager. I did have to ask for drink refills, and our waitress seemed like she might have been new, since she was unaware they had the Creme Brulee, even though it was on their chalkboard menu. Cribb's Kitchen is good, but nothing special. Will you be disappointed if you go to Cribb's? I don't think so, but I also don't think you'll be blown away. For the same type of food in Spartanburg, I would suggest the far superior Farmer's Table, although the latter is only open until 3 p.m.
Posted by Frontal Lobe at 9:45 AM No comments:

17 years same location - Just off Hwy 29/Wade Hampton Blvd. Open from 7am - 3 pm serving breakfast and lunch. Although they list Saturday hours, I've found sometimes they are open on Saturday and sometimes not, so you might call ahead if you're going on Saturday. As with any good BBQ place, they're closed on Sunday. 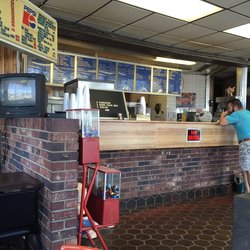 Inside Greer BBQ - I've only been inside a couple of times, since we usually get sandwiches to bring home. 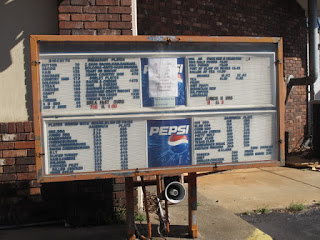 Non Working Drive-Thru at Greer BBQ - If you decide to use the drive-thru, then just drive around to the pick-up window and place your order. 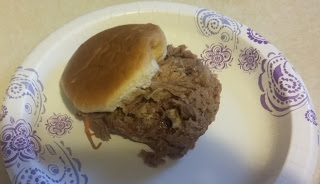 Above is the Chopped BBQ Sandwich from Greer BBQ, they put enouch meat on the sandwich that half of it will fall off while your'e eating it. This is a regular size, they also have a larger size. We get ours with slaw and mild sauce (which is vinegar based). This is some good BBQ (one of my top 5) and the people who run the place are super nice.

Posted by Frontal Lobe at 8:36 AM No comments: 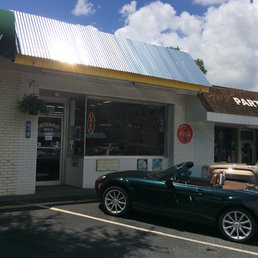 I've eaten at The Cheeseburger House three times and all three times have been great. They season their meat and even though the patty is fairly thin, it is still mighty tasty. I tried a double patty on one trip and it was almost too much for me. We've also had onion rings, fried pickles, cheese fries, and a milkshake. Everything was A-1. I should mention two things:  The Cheeseburger House is bigger on the inside than it looks from the road and the pimento cheese is spicy (since that's not noted on the menu). Is it as good as Ike's in Spartanburg? I don't think it's quite that good, but The Cheeseburger House is my number one go to spot in Greenville for a cheeseburger. Photos and menu below: 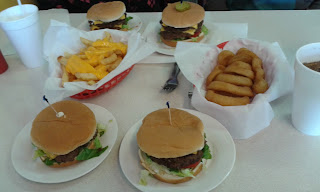 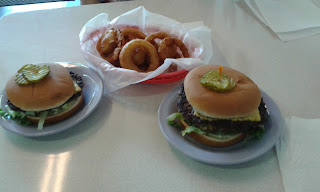 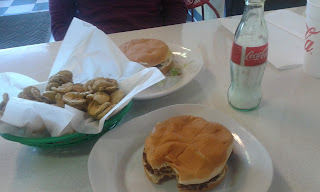 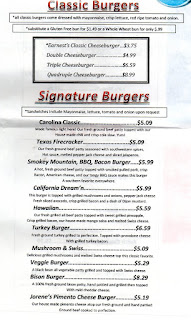 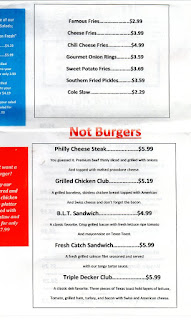 Posted by Frontal Lobe at 10:16 AM No comments: 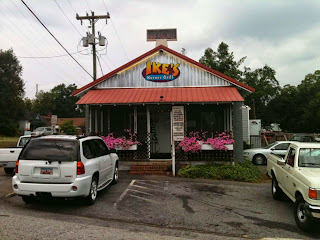 We've eaten at Ike's Korner Grill many years back and have meant to go again, but with all the other restaurants we go to in Spartanburg, just hadn't got around to another visit.  This Saturday, we finally made it back. 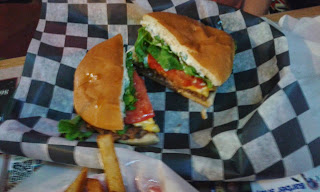 Above is the classic cheeseburger with just mayo, lettuce and tomato. When people talk about a good burger, this is what most have in mind. 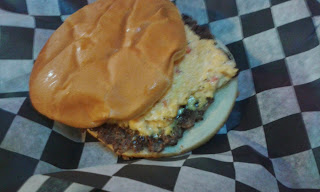 Above is the Terrier burger (great homemade pimento cheese on a burger). This was another great burger, although I liked the classic cheeseburger a little better. 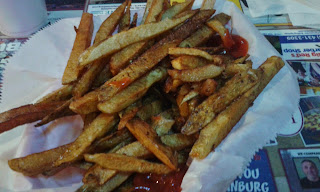 The only thing we didn't really like were the fresh cut fries. We remembered them as being greasy under-cooked fries from our previous visit, but decided to give them another try. That was a mistake since they were exactly as we remembered them. However, there was one homemade potato chip in our basket and it was really good, so that might be the way to go. 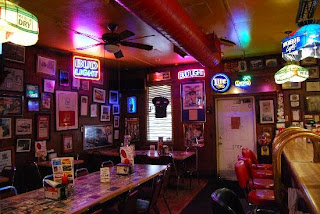 Ike's is a true dive, so if that puts you off, you might want to go somewhere else. Please Note: Ike's seems to have no problem closing whenever they decide with no warning. They just tack a sign on their door. My first visit they closed an hour early and on my second visit, they were closing 6 hours early (at 3:00 instead of 9:00) and when I arrived at 2:30 they said "sorry we're closed". Taking all of this into account, I will be reluctant to go again. They've got an excellent hamburger, I'm just not sure it's worth the hassle of trying to figure out when they're open.

Posted by Frontal Lobe at 8:59 AM No comments: 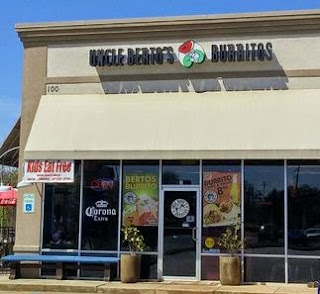 Uncle Berto's is tucked into a side of a strip mall and on first glance appears to be a chain, but is actually a local restaurant run by very friendly folks. We visited two times and have pleased with everything we ordered with one exception. 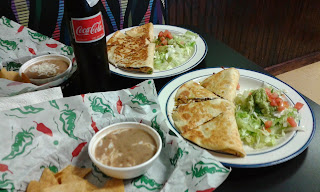 On our first visit we both had quesadillas, my wife had chicken and I had chorizo. Both were very tasty. You are also served complimentary chips with bean dip, plus there's a salsa bar. 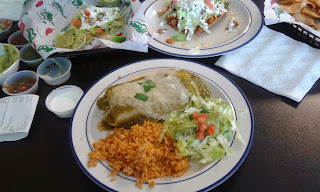 On our second trip, I had a California burrito with chorizo and my wife ordered a tostada with beef and a taco with pastor (seasoned pork). Although I preferred my previous order of chorizo quesadilla, everything this trip was also very good with one exception: the taco was soggy.  Overall, I can recommend Uncle Berto's for anyone looking for something other than your usual order by the number Mexican restaurant. As a side note, on both our visits a lot of Hispanics were eating here, so I guess that says something for the authenticity of Uncle Bertos'
Posted by Frontal Lobe at 8:42 AM No comments: